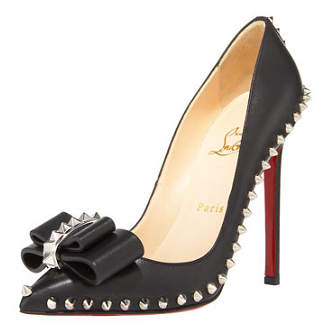 With their cigarette-thin heels and bright red soles, Christian Louboutin’s statement shoes are the go-to footwear for celebrities, regardless of where they’re headed. And it seems this pair of killer courts – cleverly named Lucifer after their devilish wicked streak – are no different.

Spotted on Elle Macpherson on the school run (seriously, how does she look that glamourous first thing in the morning?), Rihanna, Kim Kardashian and Jennifer Lopez, Louboutin’s Lucifer Bow heels are only for the fearless – but boy are they worth the wobble.

The decorative double bow at the toe mixed with deadly sharp studs and spike heels make these pumps a fierce combination of pretty and punky, meaning they’ll work with pretty much any outfit (a la Elle’s skinnies or Kim’s mini).

We’re totally sold on them – as with all Louboutin’s, they turn any outfit into a show-stopper. See how the celebs are wearing theirs below…

How to wear it: bright colours