As Cannes goes past its halfway point, you might be forgiven for thinking that the fashion may start to suffer (after all, it’s been going on for a week, how much couture is there on the planet?).

Well, you’d be wrong, of course, because the last few days have bought out some of the most fabulous frocks on the most famous of people on the planet. Even red carpet royalty Brad and Angelina have made an appearance, though the less said about Brad’s white suit the better. 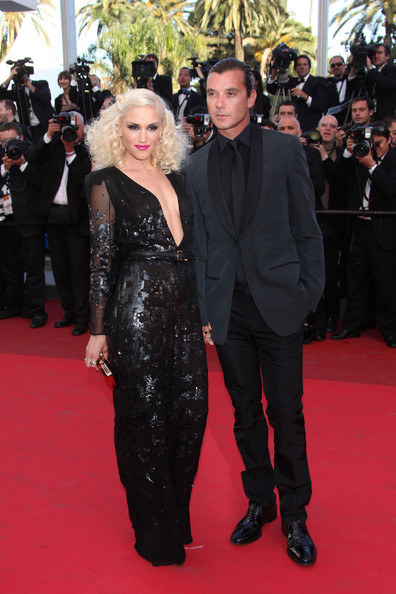 Gwen in a floor-length ball gown? Not going to happen. The No Doubt singer (pictured here with hubby Gavin Rossdale) went in a completely different direction for the premiere of Tree of Life and chose a daring sequinned jumpsuit by Stella McCartney. Only Gwen could get away with a neckline that deep paired with wild curls in her hair, smoky eyes and hot pink  lips. 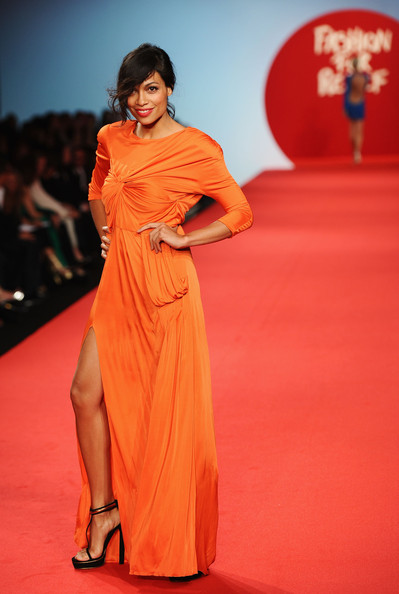 Strutting her stuff down the catwalk for the Naomi Campbell’s Fashion for Relief charity event was actress Rosario Dawson. Sporting this seasons hottest hue, the tangerine coloured draped dress was the perfect shade for her and her uber fab figure. Perfect. 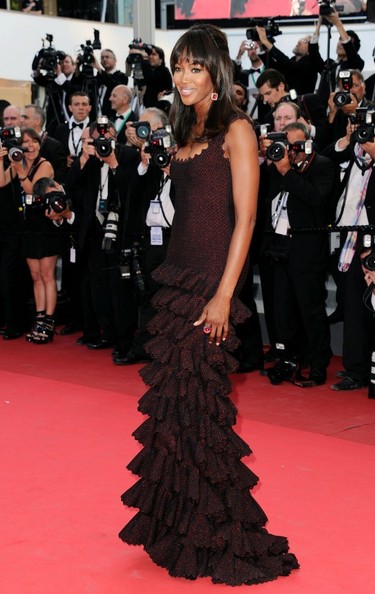 Unlike most of the other attendees clad in white, Naomi’s been favouring the darker, more mysterious hues at Cannes. We love this dress on her at The Beaver premiere. The fitted bodice and the tiered skirt create a flawless (albeit softer) silhouette on the super. 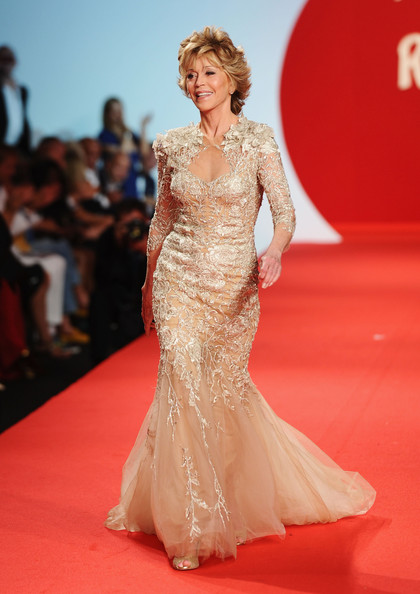 Ok, we admit it, we couldn’t resist featuring Jane Fonda in Marchesa again. Continuing her successful style streak on the catwalk, she took to the runway for charity looking delectable in a figure-hugging gold dress. We can only presume jaws were dropping in the front row. How is this woman in her 70s?! 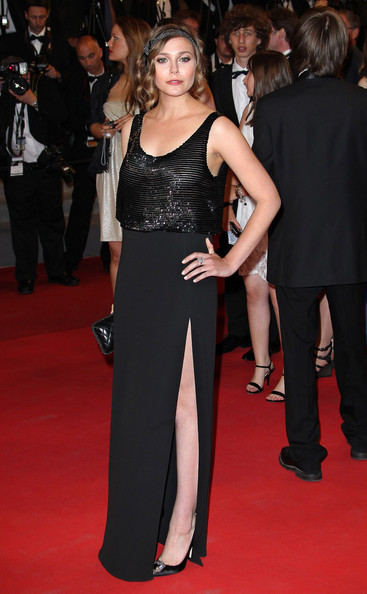 Elizabeth Olsen attended the premiere of her new film wearing this 20s style layered black dress from her sisters’ label, The Row. Thigh-high splits are the style of the day thanks to the AW11 runways, and we love the embellished top layer. Paired with pointy courts and curly hair, she’s a style star in the making. 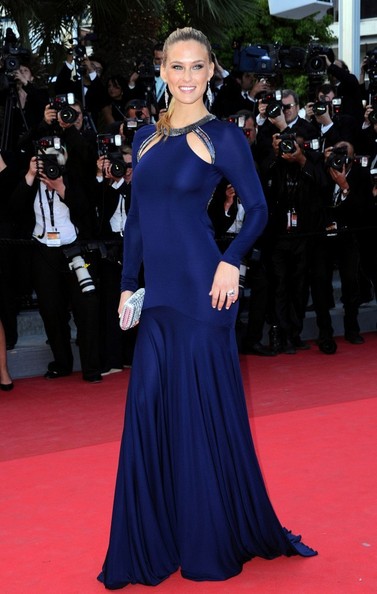 Amidst rumours that her and on-off beau Leonardo DiCaprio and her have called it a day (and that he’s now with Blake Lively, FYI) you’d be forgiven for thinking Bar Refaeli wouldn’t have made an appearance on the red carpet. But at the premier of The Beaver, she showed Leo what he’s missing in this beautiful midnight blue gown by Roberto Cavalli. The cut-outs and open back add a hint of subtle sexiness to the otherwise modest dress. Loving the slicked back hair and her drop earrings, too. 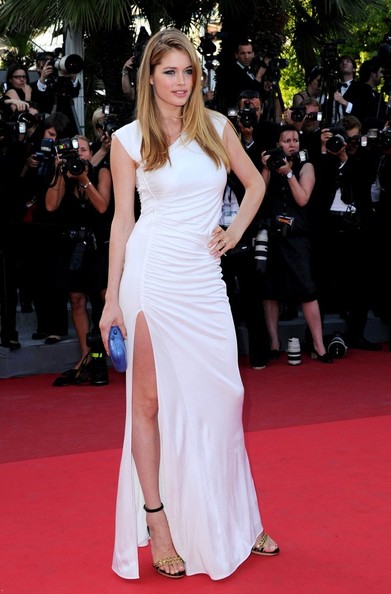 We were wondering if there was a way to put a new spin on the white dress at Cannes, but wow, Doutzen Kroes surpassed herself. Choosing a dress that ticks all of Cannes’ hottest trends – white, thigh-high split and clever draping -we love her simple straight hair and minimalist sandals. With a dress that fantastic, why make the accessories fussy? 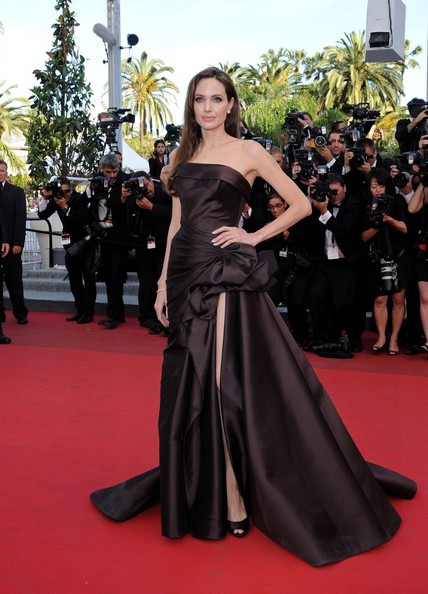 A refreshing change from all the white, Angelina returned to her dark and dangerous roots at the Tree of Life premiere and proved she’s one of the few stars who wears the dress and not it her.  No one rocks dark colours quite like Ange, and we love the origami fold on this chocolate gown, adding volume to her hips to make the most of her curves. 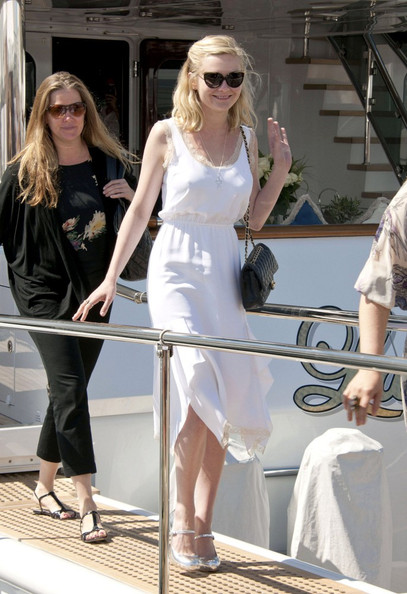 It’s been so long since we’ve seen Kirsten Dunst that we almost forgot how much we loved her kooky style. Kirsten rocked this perfect summer look on a yacht in Cannes (oh, how the other half live). We love the white sundress on her, but its the accessories that make the outfit stand out. A classic quilted Chanel bag, quirky cat eye sunglasses and metallic wedges – we’ve missed you, Kirsten.