If bold hues and saturated prints sent your pulses racing during spring/summer 2011, brace yourself and prepare to be doused in the sexier side of fashion. Fetishism’s were a seductively tantalising visual for autumn/winter 2011, as we saw designers so skilfully display the romanticised side of this extreme ‘sport’ into their collections. Sweet nothings were whispered at Christopher Kane, Dior and Louis Vuitton with delicate sheer inserts contrasted against stark black, whilst a lacier affair delighted at Lanvin and Antonio Berardi. But this bondage inspired look wouldn’t be complete without a touch of slick black PVC and leather as seen at Etro and Ralph Lauren. If innuendo were a dress, this would be it. 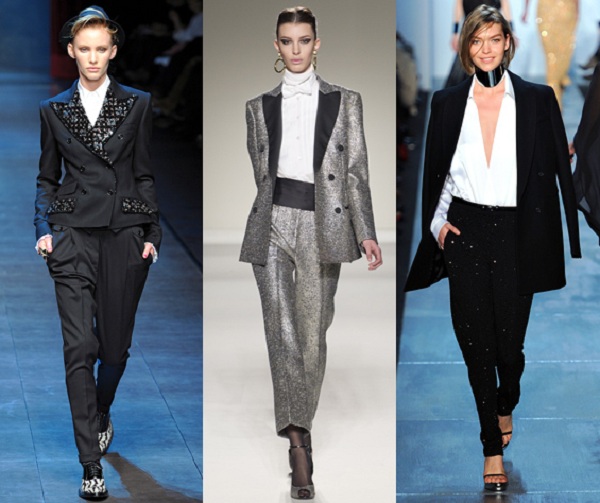 They may be impossible to live with, but the boys are being generous this season and letting us borrow from their wardrobes. Nothing brought a more mastered masculine touch than autumn/winter 2011’s softly-softly take on sharp tailoring. Injected with sexy, feminine accents in the form of sparkly trousers at Michael Kors and plunging necklines at Balmain and Chanel, tuxedos were the template. Totally transformed, with embellished lapels at Dolce & Gabbana; cropped tux jackets at The Row; rounded tailcoats at Moschino and a prevalently monochrome palette; this really is the best of both worlds.