Country/pop singing sensation (and all-round cutie-pie) Taylor Swift may have graced the cover of countless glossies, including Teen Vogue, but this is her first time as a Vogue cover girl… and we have to say we are loving her debut! Snaps to Anna Wintour for making this happen!

There was some confusion surrounding Taylor Swift’s American Vogue cover, as it was initially speculated she would grace the all-important March issue, until it was discovered that the honour would most likely be going to Adele.

Nevertheless, we think having Taylor on the front of the February issue is a very clever idea, given that Valentine’s Day falls in the month of February. Not only did Miss Swift appear in a film of the very same name a few years ago, but you’d struggle to find someone who isn’t even just a little bit in love with her.

We can’t wait to see what the rest of the editorial holds, as it apparently continues with the bohemian theme demonstrated in the picture below. Taylor poses in array of clothes from Rodarte’s spring/summer 2012 collection, including the dress below, which was seen on Elle Fanning last week at the Critics Choice Awards.

It’s amazing what Mario Testino’s fine photography and some good fringe action (bangs, for our readers overseas) can do! 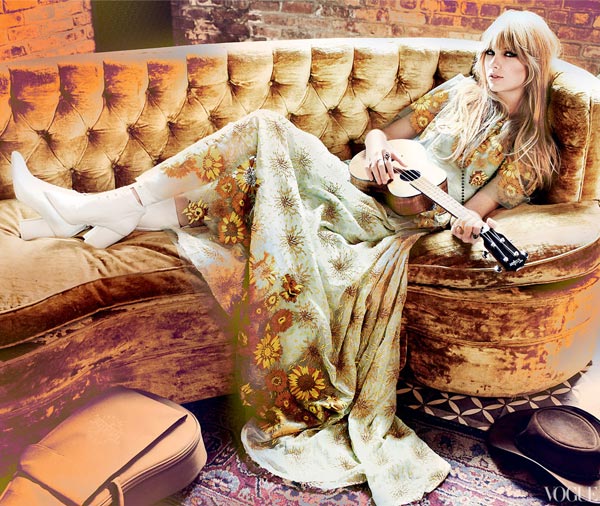