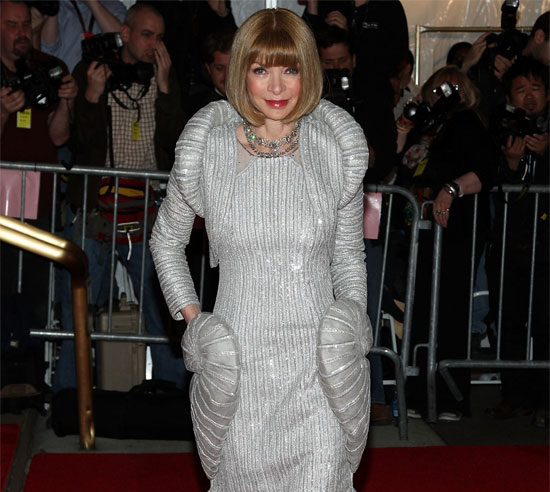 Sooner or later Anna Wintour will be dethroned. The question is, â€œWho will be her successor? Andre Leon Talley could do the job with his eyes closed. But he’s just one year shy of Wintour and it’s more than likely that when she leaves the building, he won’t be too far behind. Rachel Zoe perhaps? Now that would be interesting. After watching the insanely addictive, Rachel Zoe Project, there’s no doubt in my mind that Zoe lacks the authority and organization skills required to push out a monthly mag.

Carine Roitfeld, of course would be magic. But we’ve been there, done that and gotten the t-shirt haven’t we. How about Nina Garcia? I know it’s unlikely but I thought I’d put it out there anyway.

In my dreams I envision Katie Grand at the helm of the title. That’s just a pipe dream, but I’m telling you it’d be a success if only Si Newhouse (head of Conde Nast) could be convinced. Kanye West is looking for a job in the fashion industry; maybe he should take up the position? Of course, I’m joking. 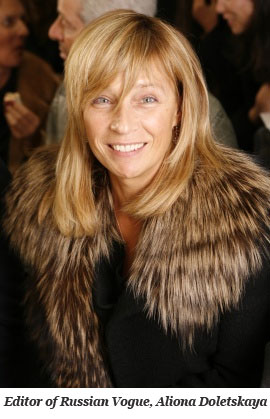 The truth is there is one obvious candidate and that is editor of Russian Vogue, Aliona Doletskaya. A combination of edgy Roitfeld and classic Wintour, the idea that Doletskaya can and will replace Wintour is old news. Towards the latter part of last year it almost appeared as though we were being prepared for it. But is she really a potential contender? Cathy Horyn labelled the idea that Roitfeld could replace Wintour as â€œsilly. Her reason? Because â€œRoitfeld runs a magazine with a circulation of 133,000, in contrast to American Vogue’s 1.2 million. Following the same argument, the possibility that Doletskaya will be editor in chief of American Vogue should in theory also be â€œsilly. After all, she runs a magazine with a circulation of 200,000.

But it’s unlikely that circulation figures will be the only or even the major factor when the candidate is hired. For American Vogue to survive, the successor (whoever that may be) will need to have the ability to cater to the current readership while anticipating the desires of the twittering mad, web 2.0 addicts. The person in question will be required to hold at least one â€œNuclear Wintour trait – she (or he) will need to be all about the business. For that reason, I believe Doletskaya (or Katie Grand) is the perfect woman for the job. Only time will tell whom is destined to take over. Meanwhile, I’m mentally preparing myself that day. It really will be the end of an era.

Fashion Fix: Victoria Beckham, hot or not in Dolce and Gabbana?