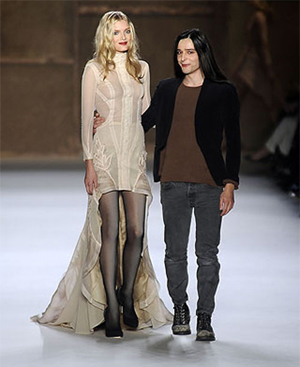 There have been rumours circulating for a long time now about Olivier Theyskens’ possible departure from Nina Ricci. Whispers that the designer is unhappy with Puig, the management side of the brand, have been passed along the front row on numerous occasions.

But once again, the rumour mill is turning. This is mainly down to Grazia who reports that Theyskens has officially left Nina Ricci. This has however been neither confirmed nor denied.

With the Autumn/Winter 09 collection just weeks away from being shown and Theysken’s contract not up for renegotiation until October it would seem highly unlikely. Although Fashionologie also claims that Puig have met with Peter Copping, who currently works under Marc Jacobs at Louis Vuitton.

Time will tell, but let’s just say there’s no smoke without fire.

70% off Hunter Boots at Gilt.com