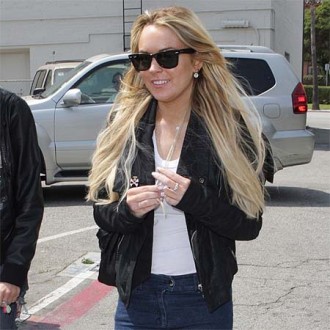 Lindsay Lohan is reportedly in talks to become the House of Emanuel Ungaro’s ‘creative consultant’.

The ‘Mean Girls’ actress is said to be discussing the role with label bosses in Paris, although head designer of the brand Esteban Cortazar is reportedly unhappy with the move.

A source told the New York Post newspaper: ‘Esteban is threatening to leave the company if they bring Lindsay on as a consultant. It has been a revolving door of designers there and if he leaves, his team will go with him.

‘Ungaro thinks Lindsay is going to bring the company new energy and new buzz, but she is going to be the nail in the coffin. Nobody will take them seriously ever again.’

Esteban joined the label in 2007 when he was 23, and was praised after his first collection debuted last year.

The fashion house is no stranger to working with celebrities.

Lindsay has previously spoken of her love of fashion, and has her own range of leggings and fake tan.

She featured in the Spring/Summer 09 campaign for Italian fashion line Fornarina, and would love to do more modeling.

She has said: ‘I love doing photo shoots. I mean, if I could just sign with IMG and do ad campaigns and model more, I’d do that because that’s fun for me. That’s not work.’

Esteban’s lawyer gave no comment on the claims, while a representative for the House of Emanuel Ungaro did not return calls.

Proenza Schouler sale on today. Not to be missed!