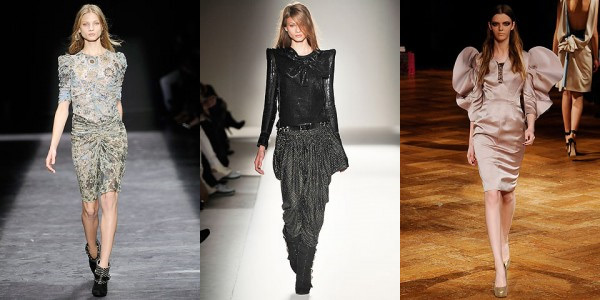 The fashion gods have spoken: This autumn, the sartorial spotlight is on the hard shoulder.

This new focus on a well-defined shoulder represents the season’s biggest shift in silhouette. Structured pieces such as coats and jackets came with architectural and austere shoulders on the Autumn/Winter runways while exaggerated puffs and pagodas emphasised the look on dresses and blouses.

Exaggerated shoulders are now the ultimate in power dressing, from Balmain’s sharp spikes to Balenciaga’s and Isabel Marant’s softly puffed billowing sleeves. A fresh take on the look came from Roksanda Ilincic who flipped the macho attitude of the new shoulder-barging fashion on its head, with a metallic party dress whose giant cap sleeves resembled Mickey Mouseears. Betty Jackson and Todd Lynn also feminised the silhouette by bulking up the shoulders with cropped, fluffy wraps.

The hidden bonus? Whatever the scale and shape you choose; these strucutral shoulders give the illusion of a teeny-tiny waist. A fashionably cold shoulder: it doesn’t get much more next-season than that.

The perks of modelling by Alexandra Richards