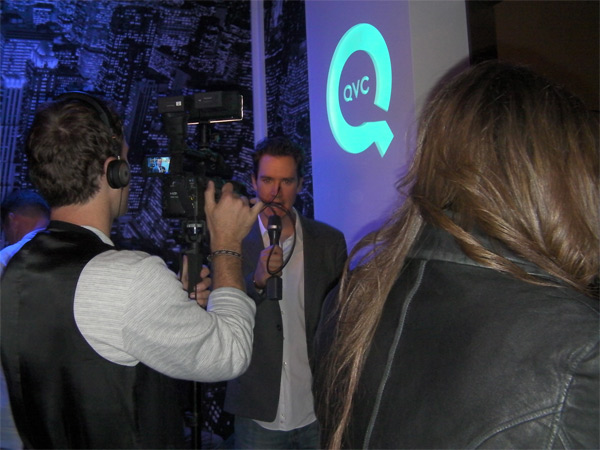 After the craziness surrounding the Christian Siriano, Chado Ralph Rucci, and Vivienne Tam shows (literally mobs of people were in the tents pushing and shoving trying to get in), the QVC event was a wonderful relief! It started at 9pm after the Tam show, the last of the night, and the music was pumping, the drinks were flowing, and there was some serious excitement in the air.

Speaking of excitement, I spotted Zack Morris from Saved by the Bell shooting something for QVC — the man has not aged a bit — and the sighting and all the childhood memories it entailed totally made my week:) Later Rachel Zoe came in amidst a frenzy to show her new line for QVC and it was cool to see that she is exactly as she appears on her show. She seems very sweet and full of great energy.

I saw her again at the DVF dinner tonight and she was dressed in this fabulous black feathery number (which judging by the shows thus far is, fittingly, totally on trend for next season), which she accessorized with over-sized rings and a QVC sequin clutch that I’m actually dying for. All and all the first half of Fashion Week has been pretty good, but I’m looking forward to this coming week (and happy that the chaos of the weekend is finally over!).