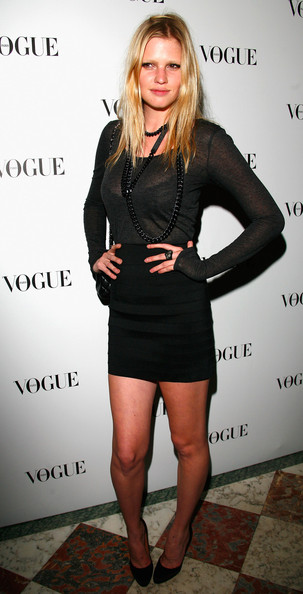 Move over Madonna: word has it model du jour Lara Stone has been snapped up by Louis Vuitton to star in its S/S10 fashion campaign.

If the rumours are true, the Dutch model will replace Madonna as the face of the luxury label. The Material Girl, who has sat for the last two Vuitton campaigns, is a pretty tough act to follow in our books , but we think Lara’s probably got the modelling might to pull this one off.

Vuitton normally reserves its prestigious place for more well-know faces (Naomi Campbell, Eva Herzigova, and Claudia Schiffer starred in the label’s S/S08 campaign), but we can’t say we’re too surprised at this move: the 25-year-old’s name is on everyone’s lips , most recently because of her controversial shoot in French Vogue in which her face, arms and legs were painted black.

Legendary fashion photographer Steven Meisel (who is a friend of Madonna’s, as it would happen) is set to shoot the campaign in New York, WWD revealed.

We can’t wait to see the young, quirky edge that Lara will bring to the brand. Confirmation she’s hit the big time? Most definitely.