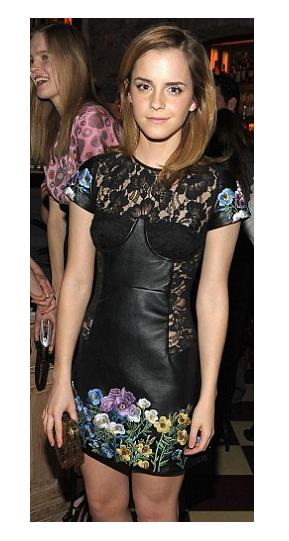 Blimey, give a girl a break. Whilst we’re still trying to get a hold of spring’s trends, the stars are already stepping in out in next season’s wears. This week it was the turn of Emma Watson, who wore straight-off-the-catwalk Christopher Kane.

The actress and face of Burberry (just how lucky one girl can get we don’t know) chose a leather and lace embroidered floral dress from Kane’s A/W10 collection – which may just have been our favourite of next season’s shows – to wear to the closing party for London Show Rooms in New York.

We have a little inkling, though, that her choice of cooler-than-thou clothing may have had something to do with her role at the party; she wasn’t a mere guest, you see, but a co-host, alongside the British Fashion Council’s Sarah Mower, the Daily Mail reveal.

The pair are promoting the new international design initiative from the BFC, London Show Rooms, which aims to increase emerging British designers’ presence in New York.

We wonder what Donna Karan would have to say about her next-season ensemble (snigger).

Kensington Palace gets a fashion makeover