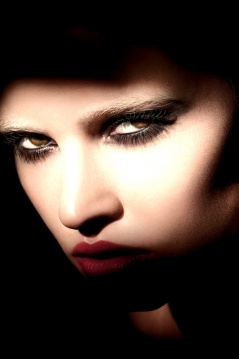 It’s all in the eyes – or at least, it is for Lara Stone‘s new campaign. Not only is she the face of just about everything at the moment, she’s also the new face of Giorgio Armani cosmetics.

We all know that curves are in – it’s no secret that Lara’s got them in all the right places – and at the moment, it would seem the right place for those curves is her lashes as she fronts the campaign for Giorgio Armani’s new Eyes To Kill mascara.

For the Italian designer, choosing Lara was a no-brainer – she’s “seductive, sensual and above all modern,” he told the Telegraph.  “With her individual beauty, she epitomises the feminine ideal of our time.”

The Dutch supermodel appears to be quite the hot ticket at the moment. She’s currently fronting campaigns for Jaeger, Eres, Louis Vuitton and, most recently, Prada’s Infusion d’Iris fragrance, replacing Sasha Pivovarova who, incidently, was the face of Giorgio Armani cosmetics last season too.

Who knew? Well, er, everyone actually. A word of warning to Sasha – Lara’s coming.