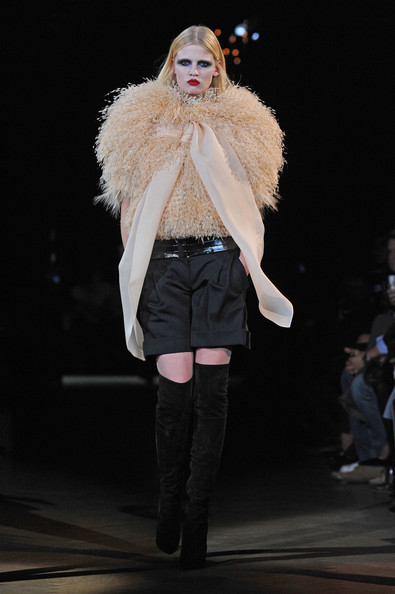 It was the rather rash announcement that flew round the fashion circuit leaving more than a few puzzled faces , Lara Stone had indeed confirmed her engagement to comedian David Walliams. And now she’s dropping details of her dress. Well, the designer, at least.

â€œI’ve asked Riccardo Tisci to make my dress, she says of her choice. And let’s face it, when you’re a supermodel it’s a mammoth decision to make.

Other wedding plans, however, would appear to be few and far between, seeing as the super hasn’t been home much since the engagement, but she gushes-galore at the mention of her husband-to-be.

And we’re glad to hear it, because battles with her body and alcohol addiction have paved a tough past.

“It’s gotten a lot better over the last few months. It’s only been 10 months, but it’s getting so much better. I kind of feel a bit insecure about things. At fashion parties, I do feel like people are kind of watching me, she says. â€œI remember how happy I am that I don’t drink any more. I think about all the bad times I had when I was drunk. I messed up so many things. I don’t want to do that any more.”

Good on her. That dress will be nothing short of dreamy.