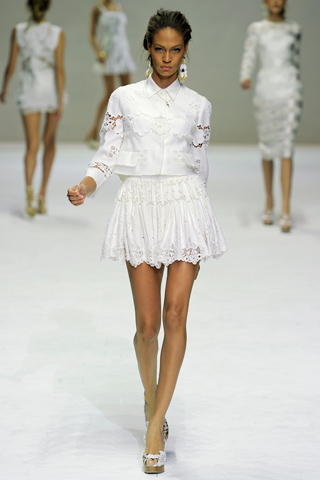 So we all know there’s a new hem length in fashion that falls somewhat longer than its thigh-skimming predecessor, but does that mean the mini skirt is out for the count? Well, if you ask one town in Italy it certainly does.

Castellammare di Stabia, a small town in Naples in southern Italy, has banned mini skirts from the province after its mayor, Luigi Bobbio, complained about falling levels of decency.

According to Vogue UK, Bobbio won a vote over the weekend to ban women in the town from wearing “very short” items of clothing – and those that don’t adhere will face a £265 fine.

Police will apparently target women whose underwear is showing, or who’s cleavage is too on display – er, do you want to show him Dolce & Gabbana’s spring 2011 collection or should we? Good job underwear as outerwear was last spring…

But all this talk of bans has got us thinking – is it really fair to put a ban on what people wear? What about freedom of expression? And, more to the point, why is this only directed at women? What about men who wear their jeans around their knees? Opinions, please.

Madonna's opening her own chain of gyms