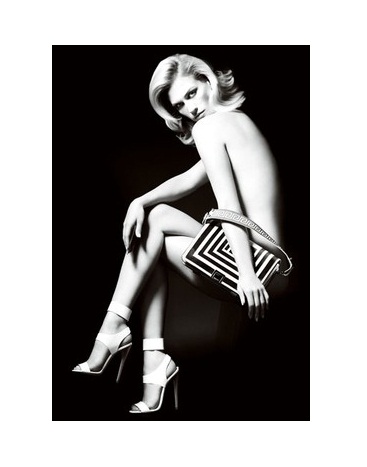 Mad Men fans will be pleased – the first fruits of January Jones’s labour as the new face of Versace have just been revealed, and we mean that quite literally, as the actress bares all for the new SS11 campaign.

Shot by Mario Testino in London, Ms. Jones wears little but the brand’s new-season accessories – a bag to hide her bum here and a sexy shoe there – in the black and white ads, with her Sixties-inspired hair and makeup a reference to her character in Mad Men.

“I am always on the lookout for the next Versace blonde…and in January I feel I have found a perfect Versace woman for the 21st century,” Donatella tells WWD. “She is chic and elegant but deeply sensual too.”

Clearly Testino got the memo – January, who takes over from Georgia May Jagger as the face of the luxury label, looks suitably sizzling.

Gifts under £50 for her: Jaeger crystal headphones