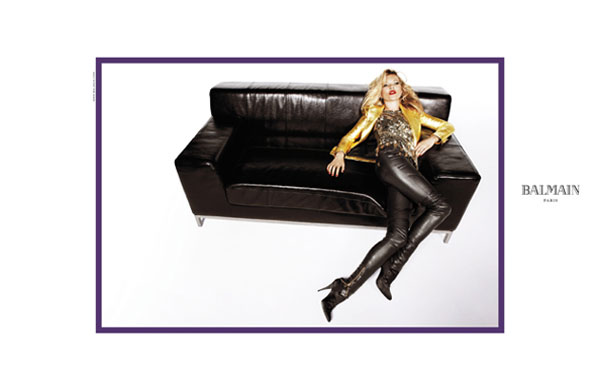 It’s a well known fact that international supermodel Kate Moss holds a special place in her heart for all things Balmain- after all, what better brand to complement her rock chick image? – and we’ve got a sneak peak of what happens when their two worlds collide.

After posing for the label’s autumn/winter 2010 campaign, which launched last summer, Kate’s love for all things dark and mysterious goes one step further with the release of this eerily quirky video of the shoot, called Everglade, on NOWNESS.

In the film Ms. Moss can be seen rolling around on that infamous black couch as she strikes poses for Balmain’s campaign when, unbeknownst to her, she’s joined by a few ghoulish animated creatures that slither in and around her body.

It was created by renowned fashion photographers Inez Van Lamsweerde and Vinoodh Matadin who set up four surveillance-style cameras to capture Kate’s Balmain campaign in action, and accompanied by an equally spine-tingling theatrical acoustic, it makes for a novel watch to say the least.

“Surrealism is always there in our work, whether it’s in camera or through computer manipulation,” says Van Lamsweerde. “We’ve had the idea for this video for some time. We are fascinated with the different realities going on in one shoot and so the music, the animation, Kate’s movements and the camera angle represent these layers of perception.”

Take a look at the film for yourselves below…