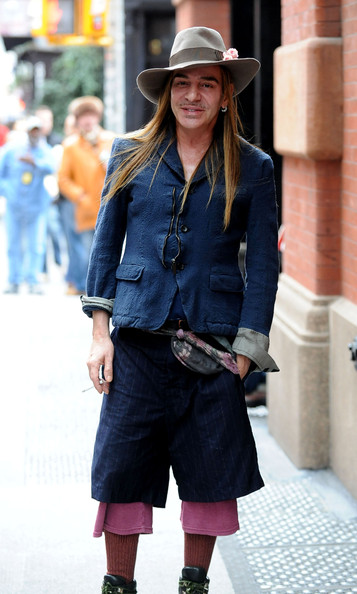 We haven’t heard a peep from him since last Thursday’s events that saw John Galliano arrested and subsequently sacked from Dior, but at last, the designer has released a statement apologising for his behaviour.

In full, it reads:

“Since the events of last Thursday evening I have not been able to make any public comment on what took place based upon advice from my French lawyer. However, given the continuing delays at the French Prosecutor’s Office I should make my position clear.

“I completely deny the claims made against me and have fully co-operated with the police investigation.

“A number of independent witnesses have given evidence and have told the police that I was subjected to verbal harassment and an unprovoked assault when an individual tried to hit me with a chair having taken violent exception to my look and my clothing. For these reasons I have commenced proceedings for defamation and the threats made against me.

“However, I fully accept that the accusations made against me have greatly shocked and upset people.

“I must take responsibility for the circumstances in which I found myself and for allowing myself to be seen to be behaving in the worst possible light.

“I only have myself to blame and I know that I must face up to my own failures and that I must work hard to gain people’s understanding and compassion. To start this process I am seeking help and all I can hope for in time is to address the personal failure which led to these circumstances and try and earn people’s forgiveness.

“I have fought my entire life against prejudice, intolerance and discrimination, having been subjected to it myself. In all my work my inspiration has been to unite people of every race, creed, religion and sexuality by celebrating their cultural and ethnic diversity through fashion. That remains my guiding light.

“Anti-semitism and racism have no part in our society. I unreservedly apologise for my behaviour in causing any offence.”

Galliano is now headed to rehab, according to the NY Times, having been persuaded to resolve his alcohol problems by Kate Moss and Naomi Campbell. The treatment centre hasn’t been confirmed, but it’s likely to The Meadows in Arizona where Donatella Versace was treated previously.

We’re glad he’s getting help for his own health, but his battle with demons is only just beginning. Rehab might resolve his addictions and dark places, but it won’t cure racism.

Vote for us in Handbag.com's online Fashion Awards 2011