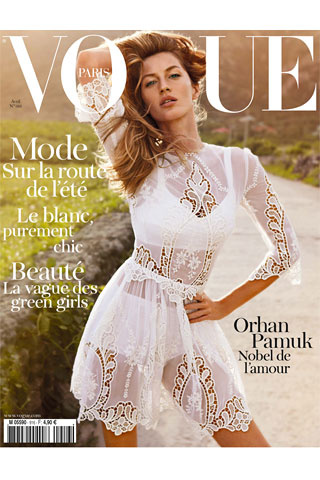 Since Carine Roitfeld’s departure from French Vogue, fashion’s been speculating with eager anticipation what the first cover under Emmanuelle Alt’s creative direction will look like – but wonder no more, it’s just landed.

Those of you hoping for something edgier might be disappointed by the softness of Alt’s debut April cover, which stars Gisele looking sickly sweet in a white lace Dolce & Gabbana SS11 dress, but we for one love the romanticism.

Looking as naturally beautiful as her St Bart’s backdrop, Gisele – shot by Inez van Lamsweerde and Vinoodh Matadin – is noticeably under-styled with next-to-no accessories and undone hair; a reflection, perhaps, of Alt’s own effortless style.

Suffice to say we’re suitably inspired for spring (cravings for crisp white lace, anyone?), but what do you think of Emmanuelle’s first cover for Vogue Paris: sweet and simplistic or lacking in attitude? Let us know your thoughts below.

WATCH: Henry Holland talks exclusively to us about his campaign with Range Rover