We may be springing back in action after a weekend’s break, but there’s no rest for the wicked on the red carpet.

Far from sunning themselves on the sand, Cannes Film Festival is still in full swing, and in case you haven’t been paying attention over the past two days, there’s more than your fair share of gorgeous gowns to catch up on.

We’ve picked our favourite from the weekend’s glam ceremonies in part two of our best dressed guide. See the stars that made the cut in Cannes below… 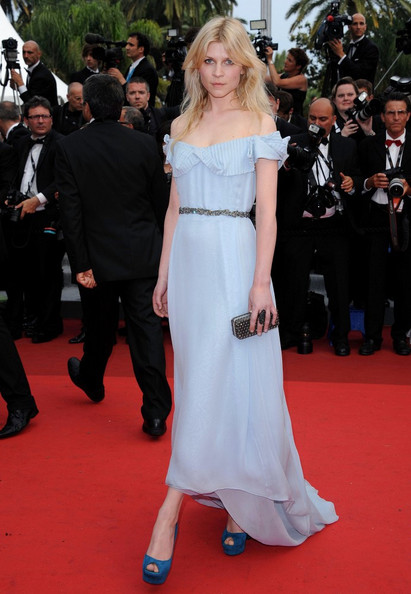 The chic French actress Clemence Posey attended the Pirates of the Caribbean premiere in this stunning sky blue dress. The colour looked lovely against her porcelain skin, the cut flattered her fabulous figure and the teal peep-toes completed the look perfectly – ethereal yet modern. 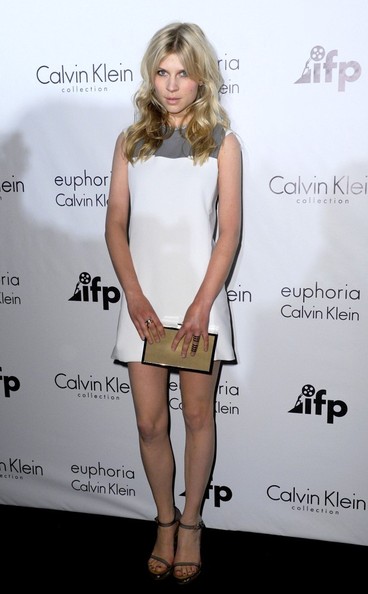 Later, at Calvin Klein’s Women in Cannes party, Clemence proved her versatility and showed she can pull off short and sexy just as well. Wearing Calvin Klein (naturally), she switched up her style with this white shift dress, strappy sandals and big curly hair. 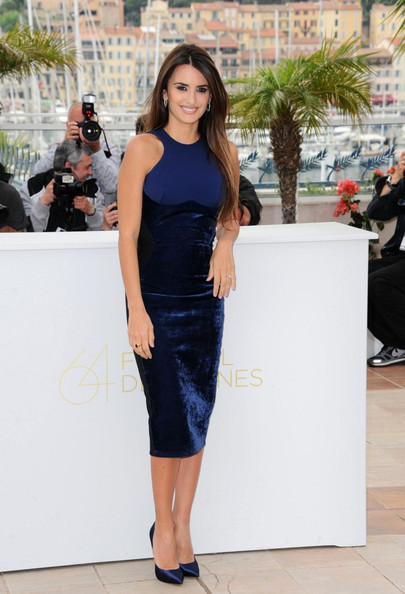 Penelope Cruz chose a sexy figure-hugging midnight blue Stella McCartney dress for the Pirates of the Caribbean photocall. The colour is beautiful on her and we love the matching courts. With a figure and a head of hair that fabulous, she kept her jewellery to a minimum. Gorgeous. 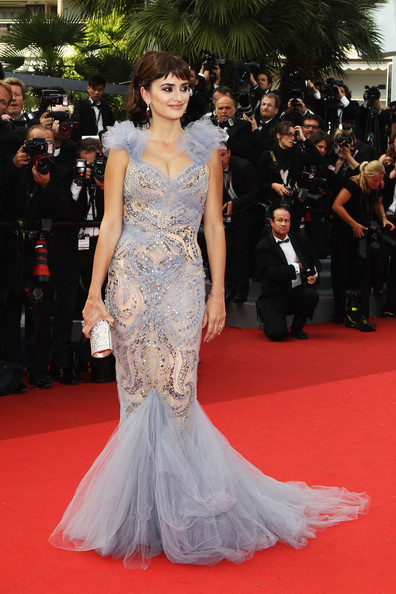 Later in the day for the premiere of Pirates of the Caribbean , the Spanish actress upped the ante in Marchesa. Flaunting her famous curvy figure, the intricate mix of delicate lilac tulle, heavy embellishment and ruffles made for a pretty perfect look for Penelope. 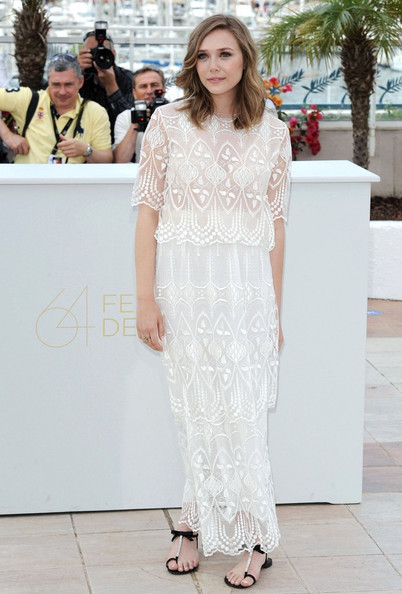 If this actress doesn’t look familiar to you, she will soon. Sister to Mary-Kate and Ashley Olsen, Elizabeth is a rising star in Hollywood, and at the Martha Mary May Marlene photocall, she showed serious loyalty to her sisters by wearing a design from their label The Row. Although white has been a very popular choice at Cannes this year, Elizabeth had a totally different take in this lace maxi dress. She looked angelic yet relaxed, proving style obviously runs in the family. 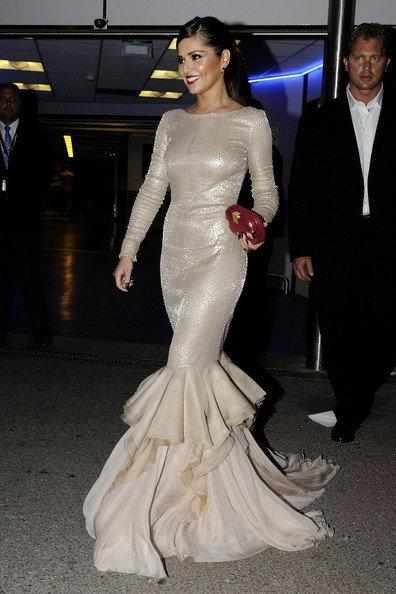 Cheryl is always a red carpet show-stopper and her appearances at Cannes this year were no exception, wearing a dress that made her instant front page fodder. Spotted on her way to the L’Oreal after party, she was shimmering in a champagne Roberto Cavalli creation. We love the flared fishtail gown and the burgundy clutch, and with her slicked back hair and vampish dark red lipstick, her look seemed to be inspired by a sexy Spanish flamenco dancer. We like! 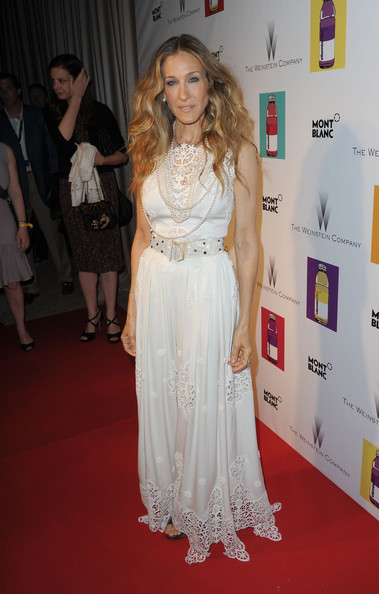 Sarah Jessica Parker was looking white hot at the Weinstein Company VIP Press Event. Whilst it may have been easy for her to get lost in the sea of white dresses, Sarah always has a fresh and modern take to add to ensure she stands out. In this case, the chunky white belt and layered necklaces take it from mundane to interesting. 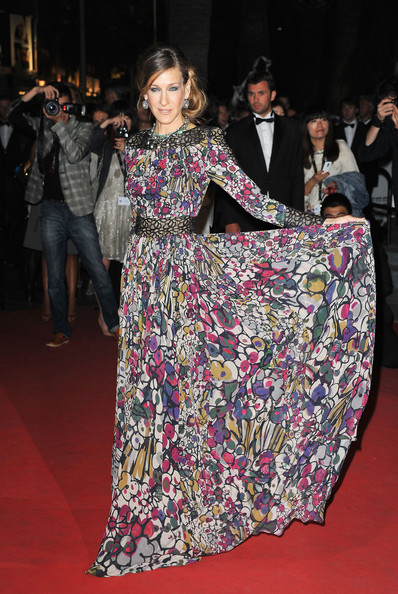 A double whammy for Sarah, who chose to wear a floral Elie Saab creation for the Wu Xia premiere on Friday evening. The long sleeved maxi was classy and understated but the lace detail and full skirt added just the right amount of drama needed for a red carpet event. 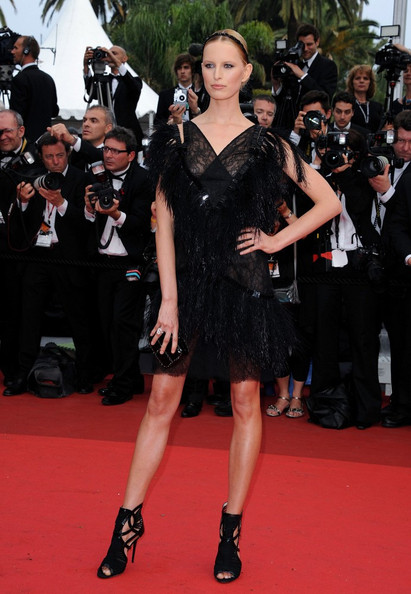 Karolina Kurkova was a breath of fresh air amongst all the ball gowns, showcasing a totally different look in Chanel Couture at the Pirates of the Caribbean premiere. The vampy dress, black cut-out ankle boots and edgy headband made for a fierce and fearless look that gets a serious thumbs up from us. 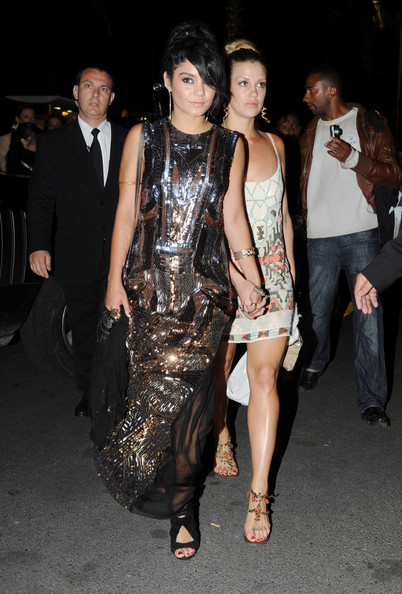 We dread to think how many suitcases Vanessa bought with her to the South of France. Her non-stop partying has meant a multitude of outfit changes but this long sequinned maxi dress is, without a doubt, our favourite so far. The directional sequinned maxi nods at the current hot Seventies trend, making her look like a total disco diva at the Belevdere party.