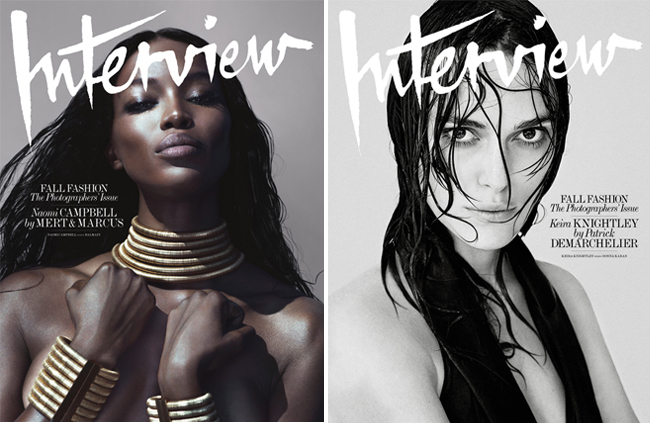 We thought we had seen all of this year’s coveted September issues when Anna Wintour finally debuted the highly anticipated American Vogue cover earlier this week, but it looks like we forgot one. The Interview September issue – and it’s a good’un!

Named The Photographer’s Issue, Interview’s September offering asked six leading photographers to choose anyone they wanted to pose for their own individual cover; and the results are pretty incredible!

Patrick Demarchelier picked the ever-photogenic English rose that is Keira Knightley, who can be seen posing in a stunning Donna Karan ensemble with minimal make-up and the quite-hard-to-pull-off wet look hairstyle. Keira managed it though – that goes without saying but the proof is in the pic above!

Photography’s dynamic duo Mert Alas and Marcus Piggott chose one of the most powerful supermodels in the world for their cover… a Balmain-clad Naomi Campbell! Well played, guys!

Other cover stars include Nicole Kidman, who was shot by Steven Klein, and American actress and model Amber Valletta, who was photographed by Craig McDean. Peter Lindbergh chose to shoot French actress Lea Seydoux for his cover, and last but not least, Ukrainian Canadian model Daria Werbowy’s cover was shot by Mikael Jansson. So much talent in one magazine!

Don’t forget to get your copy to see more pics, interviews and fabulous fashion features.

READ:   Romeo Beckham shines as the star of Burberry's Christmas campaign
This page may contain affiliate links. We may receive a small commission when you click an affiliate link and make a purchase. This helps keep My Fashion Life running so we can provide you with high-quality content regularly. Thank you for your support!