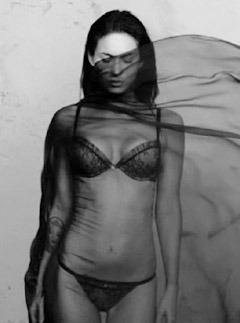 This truly hotter-than-hot clip sees the enviably gorgeous Fox stripping down to her ultra-tiny smalls for the new Emporio Armani Underwear and Armani Jeans spring campaign – baring all in the name of fashion, dahling!

But Megan’s tattooed body isn’t the only work of art on display in this seductive video – with a perfectly toned silhouette such as hers, it’s no wonder the iconic Italian fashion chose the fantastic Fox as its latest muse.

Watch the clip below, but prepare to be jealous!