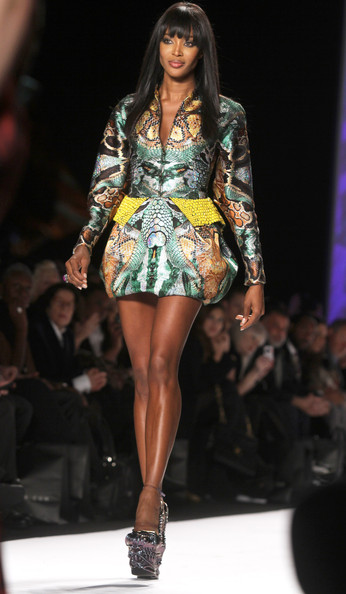 London Fashion Week may officially begin today, but last night’s Fashion For Relief show, hosted by Naomi Campbell, kicked off the week’s events with a bang.

The supermodel , who organised the event alongside Sarah Brown to help raise money for Haiti’s earthquake victims , attracted a host of stars and supermodels, as we well expected, but there was one face on the runway that was a surprise and a half: Kate Moss.

Yep, Ms Moss made her first catwalk appearance since God knows when, and took to the runway wearing a McQueen SS10 dress, later snapped up by Topshop mogul Sir Philip Green for £100,000.

The dresses worn by the likes of Naomi, Kate, Eva Herzigovia, Jo Wood, Pixie Geldof, Alice Dellal et al, you see, were auctioned off to the stylish star-studded crowd, who raised a mighty £1.4 million by the night’s end.

And so we hear over at Elle UK, there were a few unfamiliar fashion faces who took to the runway, too, including Larry Lamb, Ronnie Corbett and Piers Morgan.

Think it’s fair to say Naomi’s quite good at this charity biz.