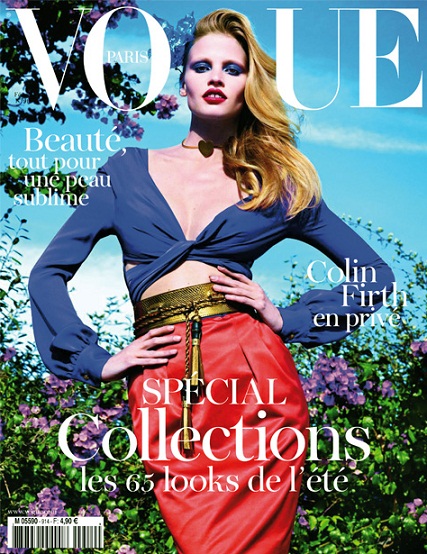 Dutch supermodel Lara Stone is no stranger on the cover of Vogue Paris – six times to be precise – but her latest instalment will be her last under Carine Roitfield’s rein.

The magazine’s February issue marks Roitfield’s penultimate spin on the Parisian bible – cue speculation on which megaweight will grace her final ever March issue already – and to mark the occasion, she’s enlisted the super-hot help of Ms. Stone to seal its success.

Shot by Italian photographer Mario Sorrenti, Stone sets the precedent for spring in a bold and beautiful Gucci dress with matching make-up to boot in a boldy-coloured floral backdrop – seemingly, Sorrenti held back on his nude tendancies for this one and opted for something rather more fashion forward indeed.

Inside the mag some of Roitfield’s other favourite models can be seen, from old faces Daria Werbowy, Natasha Poly, Sasha Pivovarova and Joan Smalls to fresh new ones Arizona Muse, Daphne Groeneveld and Saskia de Brauw – all of whom were keen to celebrate the uber-editor’s 10-year stint.

See it all in the February issue of Vogue Paris, out January 21st.